Now Available! This collection highlights 18 of David's most popular and/or significant songs from David's albums released between 2011-2020; That is, A Delicate Joy, Open Sky, Winding Down and In the Soft Light of Grace. A great all-around collection to introduce David's music to your friends and family *or* to add to your own library! The complete songbook, transcribed direct from the recordings, is also available!
>>> View Complete Track List

LISTEN OR PURCHASE THE DIGITAL ALBUM TODAY
on Spotify, Amazon or Apple Music/iTunes! 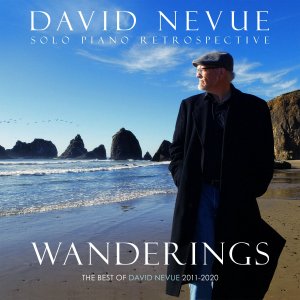 Wanderings is David Nevue's third "best of" collection. His first, Whisperings, compiled his most popular works from his early years (1985-2000.) His second, Awakenings, featured music released between 2001 and 2010. This collection highlights his most popular and/or significant works from his post-2010 album releases; A Delicate Joy, Open Sky, Winding Down and In the Soft Light of Grace.

David started recording and releasing his original piano compositions in the early 1990's. While he played publicly at every opportunity, his options were generally limited to his hometown. As his music gained in popularity, so did the number of concert requests he received. By 2006, David was traveling all across the USA, playing music in people's homes, churches, galleries, and other venues. Since his children were young and home-schooled, David was able to take his entire family out on the road with him. The adventures they had together - the fresh air, fun, new places seen and explored - inspired music! By 2010, David had two dozen new compositions ready to record.

David took the sweetest and most joyful of these songs and in 2011, released A Delicate Joy, a musical reflection on family, childhood, and treasured moments. Included on this collection are Hand in Hand - the most-streamed original song from the album - and Traveling Light, one of David's personal favorites. Also featured are the standout title track and two arrangements: Jesu Joy Canon in D (David's popular Bach/Pachelbel mashup) and Down by the Sally Gardens, a traditional Irish melody.

After filling A Delicate Joy up with his "light and happy" tunes, David was left with songs that were a bit more driving, experimental and/or darker in tone. He compiled these into his 2013 release, Open Sky, one of the most musically diverse albums of his career. A musical expression of freedom, the title track has become a "David Nevue classic" and is one of his most popular songs ever. Also included here are Dragonflies, Forgotten Places, Stargazing and David's lovely arrangement of The Water Is Wide.

Those wonderful years traveling and touring with his wife and two children were among the best, most joyful days of David's life - resulting in two extraordinary albums of music.

Life happens… and change. As David's kids got older, they became more involved in community, school, and team activities, so when it was time to tour, David now traveled alone. That meant weeks at a time away from family. "Life on the road" isn't so fun when there's no one to share it with. Loneliness invites weariness. For this and other reasons, David decided to wind down his tour schedule and put away his travel bag, happy to be home with his family for an extended period.

With his mind freed from the necessity of keeping his repertoire performance-ready, David had the creative space to write again. In just a few weeks, he sketched out the framework for a new album of works - aptly titled Winding Down. Meticulously crafted and recorded, the album was released in June 2015 to the most enthusiastic reviews David had ever received. Included here are the title track, The Acceleration of Time and David's ode to joyful eternity, A Thousand Years and After.

God's grace surrounds us like a very soft light. It's always "on" and it's always active. Unfortunately, we don't often see it. Why? In part, it's because we are too busy carrying around our *own* lights. We shine them on our wants, goals, needs, accomplishments and, of course, ourselves. Until we put down our own lights, we won't be able to see His. That's just the way it is. Sooner or later, due to tragedy, illness or just old bones, our lights will begin to fail. When they do, and when we face the increasing darkness, that's when our faith, if we have it, is tested.

Six months after the release of Winding Down, David's mother was diagnosed with stage 4 cancer. His focus turned to helping her manage her affairs. During this stressful time, David was increasingly struggling with joint pain and vertigo - to the point that it impacted his ability to read, type and even play the piano. In a physical and emotional fog, David began to wonder if Winding Down would ironically become his last album.

After a long period of listlessness, David made the conscious decision to stop striving and let go of things that were out of his control - including his seeming inability to compose anything new. He rededicated himself to his spiritual life and devotional time in the Bible. He started walking five miles a day and used his "walking" time to pray, free his mind and to just… breathe. He turned to photography as a new form of artistic expression and learned to enjoy the quiet. These changes in action and mindset were transformative.

During the final year of his mother's life, David's piano became a resting place and a balm for his soul. He just sat… and played. He kept it simple. In doing so, the music began to flow again. In August 2018, David's mom went to be with Jesus. Nine months later, David released his sixteenth album, In the Soft Light of Grace, dedicated to his mom. Featured in this collection are the title track, Walking in Trust, Equilibrium, At Last Light and a song that is a heart-cry from one of his darkest moments, Out of Pain, Comes Beauty.

The future from here? Only God knows, but…

"…they that wait upon the LORD shall renew their strength; they shall mount up with wings as eagles; they shall run, and not be weary; and they shall walk, and not faint." - Isaiah 40:31

David looks forward to full and complete restoration. His hands are in God's hands. It's all grace.